This is going to be a long one, so I’ll just leave this video here as a little bit of a TL;DR:

Quickly though, this was made for the Building Virtual Worlds Class at ETC. A team comprised of myself, Melissa Schoeller, Sharan Shodhan, Na-Yeon Kim, and Griva Patel built this entire experience in two weeks.

At it’s core, Little Wanderer’s Wish is an immersive, collaborative, puzzle game. Two players are tasked to navigate through six different lands (mountain, city, forest, glacier, ruins, and factory) and collect star pieces. One player is given two PS Move controllers to control the movement of the character while the other player is given a physical book(conceived and made with Makey Makey by Griva Patel). By turning the pages of this book, the player will change the onscreen environment.

Each environment has different terrain and structures within it, presented as silhouettes. These silhouettes are impassible, so the players must explore the various pages of the storybook to find open paths to progress through the level. Players will need to take into consideration the layout of multiple pages at a time, i.e. if they turn from one location on one page, they will fall to a new part of the level on the next page.

We built this game for Carnegie Mellon’s Entertainment Technology Center’s CAVE (Cave Automatic Virtual Environment). This is a space where the players stand surrounded on three sides by projector screens. The game is then mapped across three projectors to give players a sense that the game is happening all around them.

Ok, that’s cool and all, but where does sound fit in to all this?

This is the fun part! Each individual page has it’s own unique two and a half minute loop of music. When the player turns a page, the music transitions along with the environment. This was initially a little difficult. A different song for each page? Won’t the transitions be jarring, and annoying? The players will probably only be on one page for a matter of seconds. How will that work? After thinking about it, I decided to make every piece based off of the same harmonic progression and the same formal structure. When the player turns a page, the song on the next page would start playing right where the previous page’s song left off; creating a very smooth, almost unnoticeable transition. It worked really well! Each loop is supposed to emulate the corresponding environment without being too stereotypical. Take a listen for yourself:

The mountain page was kind of like the hub world to our game, so I wanted the music to reflect that. It encompasses all the themes that will be heard on all other pages of the book and eases the player into this sense of adventure with the pizzicato cello and harp. I feel that the little wanderer is symbolized by the music box and celesta, and these make small appearances in the music on other pages.

For the city page, I tried to emulate the instrumentation that I saw in New York City funk bands. I wanted to make the instrumentation a little cheesy, so I settled on guitar harmonics, electric bass, drum pads, and keyboards. This was imposed over a bustling city background.

I drew from my time studying Mbira (a cultural thumb piano from Zimbabwe) to write the forest page(although quite loosely). The various thumb pianos and drums take the foreground to evoke a sense of nature, while synths, accordions (admittedly not so African), and natural noises take the background to create a sense of openness.

The glacier page is cold, barren, and dark (although beautiful!). The instrumentation is much more sparse with heavy reverb. This allows the wind ambience have a much more prominent character and illicit a sense of loneliness.

At first, I wasn’t sure how to approach the ruins page. I thought about making it more desolate, but the glacier page, right before it, filled that need, and I wanted to keep the upbeat spirit of adventure that the other pages had. I looked to what the Romans and other ancient cultures used for instrumentation(although also very very loosely). I settled by focusing on lute, flute (in the spirit of old style woodwind instruments), tambourine, and human voice.

The factory page was, by far, the hardest to write. I knew I wanted a mechanical, stable, and fixed beat, so the hammer and wrench sound came naturally. Still, I wanted to go for a steampunk feel, and everything I did felt too modern and synthy. That turned out to be exactly the problem: too many synths. I traded out most of them for a harpsichord backbone, cellos, and woodwinds. Still, a few synths made it through including a bass sequencer, pad, and really cool mellotron. I think the combination of natural and synthetic works to the advantage in the piece.

Because of the success of our project, Little Wanderer’s Wish was one of the thirteen games (of around eighty) to be feature in our school’s fall festival; a festival where family, friends, colleagues, and games designers were invited to play and experience the showcased games. We were given a small room and one week, and told to theme the room it to our project. The final product looks something like this:

We decided to try and theme the room like a children’s bedroom to go along with the magical storybook element of the game. We built real-life silhouettes (to echo the silhouettes in the game) out of cardboard in the shape of various things that would be found in a bedroom and pasted them along the walls. We placed lights behind them to make them pop out. On the right wall, we made a “star wall.” It echoed the look of a window, and players that won could place a star with their own personal wish on it. It also covered up a gross whiteboard. The rest of the set up included a small bed for the players to sit on, DMX lights (the colors changed whenever a player turned the page), a stereo, four speaker set-up, and a rather comfy couch. 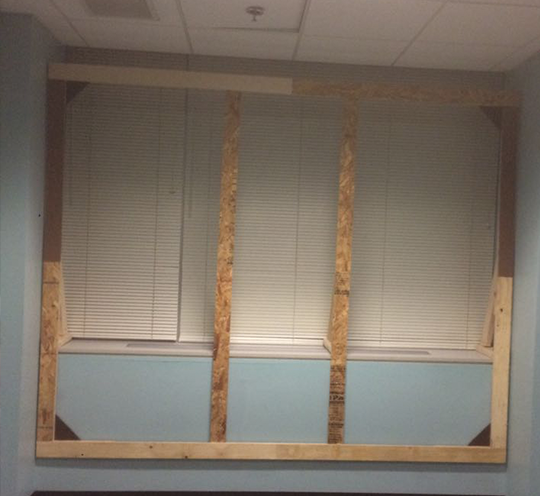 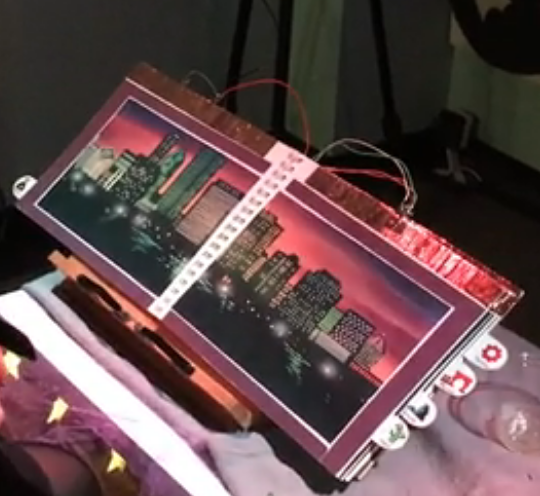 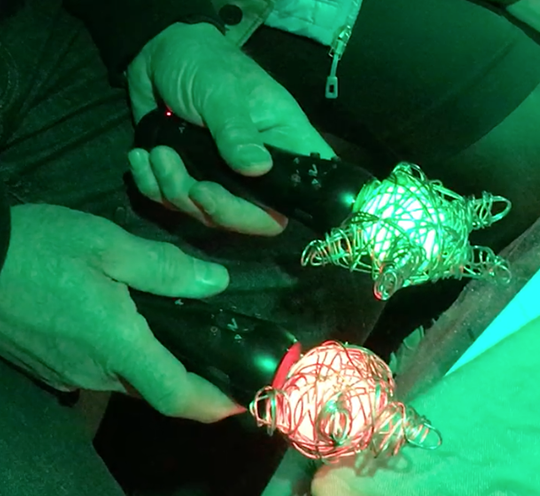 Since we were no longer using the cave, we had to reformat our game. We decided to project it across a projector screen. There was one problem, our school did not have any, especially to fit the awkwardly sized space. This is the frame of a custom made projector screen that our team built(totally designed by Na-Yeon Kim).

Our finished book. Griva went through a couple iterations, but we settled on this. It was mounted on a table-side desk in front of the projector.

We themed the PS Move Controllers to look like stars.